I’ve begun blogging about poetry at memorablespeech.com. Why? As a poet, editor, and teacher, raised in the craft by my father Lawrence Hart and his “Activist” colleagues, I have some things to say that I hope will be of interest. Not always nice things: for I think the current poetry “scene” is drunk on positivity and reflexive, mutual praise. W. H. Auden gave poetry the baseline definition of “memorable speech,” hence the blog’s address. How much of what we read and hear under the flag of poetry meets that minimal standard? As I go on I hope to arouse comment, even controversy. I’d love to have feedback at the site, of all and any kinds.

Still on the Bay-Delta water beat. In late 2020 I wrote about a highway and a town menaced by sea level rise; interviewed leading Bay scientist Julie Beagle for the  new podcast series Science-in-Short; and reported on the iffy condition of the “research fleet,” the multi-agency armada of about 100 specially equipped boats that brings in vital data on the health of the San Francisco Estuary. With a new administration in Washington, 2021 should be an interesting year.

Flows for fish? Not so much

Viruses come and go (soon, we hope), but the tug-of-war over California water is always with us. In a piece for Bay Nature, I trace the latest twists as Governor Newsom seeks compromise and President Trump seeks, well, nothing but maximum water for the San Joaquin Valley. The hope of a negotiated truce seems to have gone glimmering. Will the powerful State Water Resources Control Board pick up where it left off at the end of the Jerry Brown years, mandating that we let a bit more water flow down rivers for the sake of fish, the Delta, and San Francisco Bay?

So begins my lengthy article on the poets of the Activist Group, which formed in the 1930s around my father Lawrence Hart and achieved national profile in the 1950s. The piece appears in the online journal Talisman: A Journal of Poetry & Poetics. I describe Hart’s critical ideas, his unique approach to nurturing poetic talent, and the very diverse styles his students evolved. Concluding with work by contemporary poets working in this tradition, the article is a down payment on a pending Activist Anthology. Here’s more about the background and current publications and readings.

Uh-oh! State of the Estuary Conference 2019

In October in Oakland, scientists met to share research results on the health of San Francisco Bay and the Delta. Diagnosis: condition guarded and trending the wrong way. Getting from knowledge to timely action is the challenge I write about in two longish pieces for the excellent Estuary News, December issue. Can a little more water be allowed to flow down overtapped feeder rivers to nourish Delta and Bay? Can a mishmash of shoreline governments really form a common plan to deal with sea level rise? Hope is in the air at such conferences, but inertia is a mighty force in the world outside. See my “The View from the Precipice” and “Regional Science and Governance.”

So many people write poetry: How many read it with open yet discriminating minds? This discussion course at Book Passage, Corte Madera, is a place to get down to earth with poems: what we like and what maybe we don’t; what has a stirring effect and what, in another brain, does not. Poetic “beginners” are welcome. We start Monday, September 9, 7 to 9, and continue for the eight weeks to Halloween. In all weeks but the first, I send selected texts to mull in advance. “If you like poetry,” a returning member says, “you’ll enjoy this class. If you don’t know if you like poetry, you’ll enjoy this class.” Signup here.

Bluecoat and Pioneer has been on the road, with events in Casper, Wyoming (Fort Caspar Museum), Story, Wyoming (Fort Phil Kearny) and Cedaredge, Colorado (Grand Mesa Arts & Events Center and Pioneer Town). I gave four different slide shows, featuring John Benton Hart’s stories of adventure in each spot. In October, it’s the turn of Kansas City, Missouri, and Topeka, Kansas, in the region where the young Hart enlisted in the cavalry and helped fight off the massive Confederate invasion of 1864. Order book

Poem in Presidio exhibit through May 2019 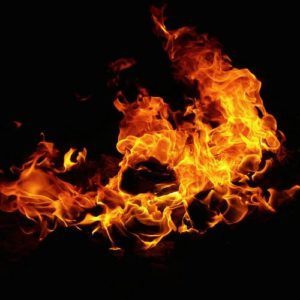 My poem “Sirens” is one of two texts chosen to be drawn in calligraphy for display among paintings and sculptures in the exhibit “Earth Air Water Fire: Balancing on the Edge.” The show hangs through May in the Tides Converge Gallery at the former Letterman Hospital site, 1012 Torney, San Francisco (open weekdays, 8:30 to 5:00). The exhibit is the brainchild of Gwenda Joyce, the Art Ambassador; “Sirens” was initially published in Blue Unicorn. Fire image by Moein Moradi. Bluecoat and Pioneer debuts in Berkeley on February 21, 5:30 to 7:00, at University Press Books on the edge of the UC campus, 2430 Bancroft Way. I’ll talk about the origin of the manuscript–“a genuine attic find,” one reviewer says–sketch the 150-year-old events my ancestor barely survived, and read some dramatic passages.  We’ll explore an unexpected link to Bay Area history, the Native American occupation of Alcatraz in 1969-71. The usual refreshments. More about the book at University of Oklahoma Press.